Restoration of the Jennie Wade 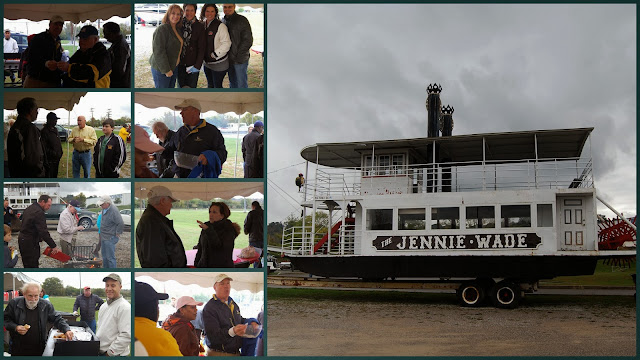 October 19th was an unseasonably cold day for the First Annual Boater Appreciation Day at Rivertowne. Those who braved the elements, however, were not disappointed.

Don Jones took the opportunity to introduce the Jennie Wade to the attendees. You can read all about her history by clicking on the tab at the top of the page. By spring, the Jennie Wade should be a place where boaters will be able to purchase ice and light refreshments and watch their boats being launched and retrieved from the deck of the sternwheeler. There is quite a bit of excitement to be had in watching all of the hustle and bustle in a marina on a great boating day.

Captain Don raffled off several shirts commemorating the Jennie Wade to attendees. Bill Manis and other members of the Rivertowne crew attended to the grill and ensured that no one went hungry. As this boating season comes to an end, we look forward to the spring and the changes to the marina that should make 2014 the best year yet.
Posted by Kathy Reed at 1:27 PM No comments:

The Jennie Wade Sternwheeler Gets a New Home

On September 9th, 2013 the Jennie Wade Sternwheeler began a new adventure. She was acquired by Captain Don Jones, new owner of the Rivertowne Marina in Cincinnati, Ohio. For the past ten years, the Jennie Wade has been used to educate both young and old as part of the Clermont County Chilo Lock 34 Park. You can read all about her restoration and previous uses by clicking on the tab at the top of this page called "History of the Boat."

We arrived at Chilo Lock 34 Park early on September 17th -- a perfect September morning. Since the Jennie Wade does not have an engine, Chris Tucker was going to guide her to her new home using his tow boat.

The next task was to launch the Jennie Wade. Park personnel had to trim a few tree limbs to allow the boat to be moved to the launch ramp. She had not been in the water for ten years, so there was a little bit of anticipation as she floated from the trailer. The launch ended up being uneventful. We were notified, however, that our trip would be delayed as a barge was just about to be locked through the Meldahl Dam and we would have to wait until the lock was clear to begin our adventure. 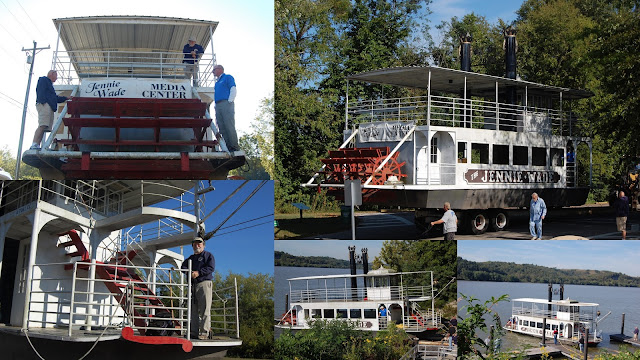 Everyone on board, including her previous owners Wayne and Bev McClain, was impatient with anticipation. So Chris Tucker moved her from the dock and we were all impressed with her apparent seaworthiness and stability on the water. With the lock free, we were on our way. 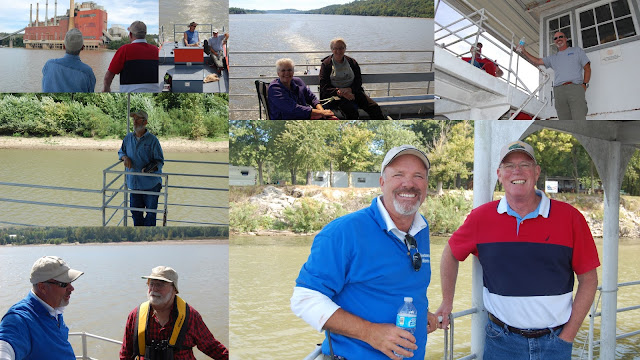 As you can see, the five-hour cruise from Chilo to Cincinnati involved a lot of hard work.

So here is to new beginnings ... stay tuned to see how the Jennie Wade adapts to her new life bringing joy and excitement to all who see her.